The Census cares what you believe

Source: Religious Freedom Doesn’t Care What You Believe, But The Census Does – New Matilda

Ahead of next week’s Census question on religion, spare a moment to consider religious freedom: the right to believe and practise your religion or non-belief. 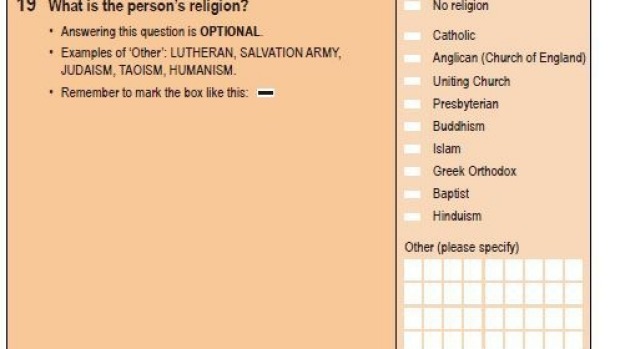 We acknowledge each other’s rights to believe and disbelieve. Thus, I don’t care if you believe in God or not. Neither do I care whether you believe in a universal spirit, angels, Paleo, or magic beans.

Scientist or a Scientologist, it’s all the same to me. I don’t care if you’re if you’re a Jew of Gentile, Protestant or Pastafarian, an Anglican or an astrologer, Jesuit or a Jedi, or, if you worship John the Baptist or the John Frum Cargo Cult. But I do care if you answer the Census question accurately.

Why? Because the Census helps to determine government policy and funding, and helps explain who we are and how we live. It gives a snapshot of what we’re like and how we’ve changed. This year’s Census will likely show a shift away from Christianity towards non-belief, which might tip the balance towards more secular policymaking.

The Atheist Foundation of Australia (AFA) ‘no religion’ campaign invites Australians to consider if they’re “Not religious Anymore?”

AFA President Kylie Sturgess says the purpose is to encourage Australians to think honestly about their beliefs, so the Census result provides an accurate indication of religious affiliations.

“We’re letting people know they can mark ‘no religion’ when perhaps they didn’t realise that option was available to them, because until now, it’s always been at the bottom of a long list. You don’t have to be an atheist to mark ‘No religion’,” Ms Sturgess says.

“Many people feel spiritual, and lead moral lives encompassing values like charity, peace, and love without identifying as religious”.

Sportsbet reports ‘no religion’ is a favourite to shoot to number one place in our religious affiliation in the 2016 Census. It’s also giving good odds that ‘no religion’ will jump from 22.3 per cent in 2011 to over 30 per cent – a May IPSOS poll with the same question recorded 38 per cent.

The shift from Christianity to ‘no religion’ has been the topic of much speculation. The number of Christians is in freefall in Australia, only buttressed by the large number of people who record a Christian affiliation without necessarily believing in or observing the religion.

A 2012 McCrindle survey noted one third of Christians considered themselves “more spiritual” than Christian, and less than one in 10 Australians fill the pews regularly.

Australians are far less devout that our US cousins, but our country is also much less secular. Compared to the formidable Wall of Separation in the US Constitution, Australia’s impotent Section 116 (which has never been successfully upheld in Court) is scarcely a rabbit-proof fence, rickety and falling into disrepair, as millions of dollars in funding pass over it every year for religious enterprises.

More tax payer money per student is provided to independent schools run by the secretive Plymouth (ex-Exclusive) Brethren, and those linked to Scientology, than to State schools. While new developments in genetics and evolutionary biology make headlines, we spend a billion dollars on schools teaching Creationism.

The beneficiaries of religious funding are organised faith groups, as opposed to individuals or groups from a cultural tradition. The taxpayer sponsors groups who may discriminate against them, espouse disagreeable views, and provide little or no public benefit.

Since the primary goal of most faith groups (especially Christian ones) is to promulgate their own beliefs, citizens marking the Census should carefully consider whether they still subscribe to those beliefs.

It might seem counterintuitive, but the higher the numbers for ‘no religion’, the more likely governments will move to protect religious freedom. The more we affirm our secular nature, the greater the pressure on governments to remain religion neutral.

This is the real meaning of religious freedom, as originally invoked by the Danbury Baptists and the Australian Catholics, when both groups campaigned for secularism to be enshrined in our respective Constitutions, to protect themselves from State interference in religion.

Founding Father and former US President Thomas Jefferson epitomized the spirit of secularism thus: “But it does me no injury for my neighbour to say there are 20 gods, or no god. It neither picks my pocket nor breaks my leg.”

The problem in Australia is that we allow faith to continually pick the taxpayer’s pocket – to the tune of billions of dollars – despite fewer and fewer of us subscribing to it.