On abortion, even God more permissive than our laws

FOUR in five Queenslanders, according to a 2009 Auspoll survey, want to change the archaic 1899 state law which makes terminating a pregnancy a crime.

Source: On abortion, even God more permissive than our laws

FOUR in five Queenslanders, according to a 2009 Auspoll survey, want to change the archaic 1899 state law which makes terminating a pregnancy a crime.

A committee of inquiry has been asked by Parliament to report by August 28 on independent MP Rob Pyne’s Private Member’s Bill decriminalising abortion. 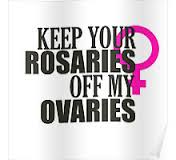 More than 1300 submissions have been received, many wrongly claiming it would place no gestational limits on the procedure.

David van Gend and Amanda Sheehan have both written for The Courier-Mail, seeing to heighten this fear. Pro-lifer van Gend even said the Bill meant an “open season on babies right up to birth”.

His hyperbole is misplaced given Pyne has said gestational limits should be put in place and the committee has been asked to recommend appropriate limits based on arrangements in other states.

Moreover, late-term abortions are rare. Fewer than 1 per cent take place beyond 16 weeks in Australia. They’re expensive, difficult to obtain and usually due to tragic circumstances, such as severe foetal abnormality.

Van Gend also appealed to tradition, saying “the law on abortion in Queensland has stood the test of time”.

It’s easy to fall headlong into the trap that something is good because it’s been around for a long time. But, if we pause, we might recall the pre-Enlightenment millennia of slavery, racism, infant mortality, poverty and torture, and reject such a plea.

Nearly one in three women has an abortion at some time in their life. It’s a common medical procedure. Thus, it’s not surprising that there are approximately 70,000 each year in Australia — a figure Sheehan cited again and again as though it constitutes a national moral crisis.

What she wants to do about this apparent epidemic of “abomination” is unclear. Make it more illegal? Or, make it more punitive? Currently, women can be jailed for up to seven years and doctors for 14.

Reducing unwanted pregnancies is a better idea. A study by medical journal The Lancet, in the UK, showed that since 1999, sex education and contraception has halved unwanted teen pregnancies.

In Queensland, doctors operate in fear of contravening the law, relying on a legal precedent where the procedure is allowed if the health of the woman is endangered.

This ambiguity has real world consequences: a Cairns couple faced a criminal trial in 2010 and this year a pregnant, 12-year-old girl had to get the Supreme Court’s imprimatur for a termination.

Miscasting a heart-rending dilemma many women face as an “open season” to murder babies diminishes the rights of women, ascribing a sinister motives where none exist, and deliberately obscures the necessary balancing of rights.

Further, to cry “murder” in defence of a developing human embryo, a human in potential but not yet in reality, constitutes a category error.

There is simply no method to measure the rights of a foetus at every stage in its development. No point, from conception to birth, provides an easy or agreed milestone for when a foetus becomes a person: the point at which one of our systems of human rights could be applied.

Although the pro-life argument is consistent in Catholic dogma, conservatives and Christians have not always opposed terminations.

When thousands of poor, US women were dying from unsafe abortions in the 1960s, due to laws identical to those in Queensland, it was the New York clergy who took up the pro-choice cause.

New York legalised abortion in 1970 and the landmark pro-choice ruling in Roe vs. Wade occurred in 1973. But more than 40 years later, Queensland still has the same draconian laws.

Given this disagreement on what God thinks, perhaps we can take a cue from nature. Since half of pregnancies end in spontaneous natural termination and 20 per cent of known pregnancies end in miscarriage, God himself must be more permissive than Queensland law.

Rather than trumpeting the length of time we’ve retained abortion laws that are among the most repressive in the world, Queenslanders must stand them no longer.