The religious right have had plenty of say on Safe Schools. Their response is strangely muted when it comes to religious instruction that teaches kids about sex and vampires. 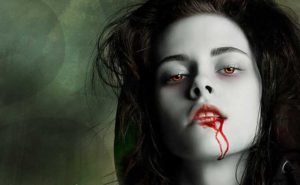 The religious right have had plenty of say on Safe Schools. Their response is strangely muted when it comes to religious instruction that teaches kids about sex and vampires.

“These books are about vampires”, begins the Connect religious instruction lesson for seven to nine year old children, introducing the well-known “Twilight” series of vampire novels, well known for their blend of eroticism and horror.

Recommended for ages 13 and over, the series follows the trials of Bella Swan, who falls in love with the pale but good-looking vampire, Edward Cullen. It tells of his struggle to resist the strong sexual desire aroused by the scent of Bella’s blood, and his choice to protect her from a coven of evil vampires.

“Some of your older brothers and sisters, or even your parents, may have read these books,” the lesson continues.

The Connect religious instruction (RI) program is produced by the Sydney Anglican group Youthworks, and is widely used in NSW and QLD.

“Who can tell me what they think a vampire is?” the class are asked.

“In these made-up stories about vampires how do you think someone becomes a scary vampire?”

“Accept responses. A vampire bites them and drinks their blood, the person dies and then the person comes to life again but this time they are not a person, they are a vampire”.

The Christian fascination with the vampire myth relates to the inversion of the communion sacrament. The human immortality resulting from drinking the blood of Christ is contrasted with the immortality of drinking human blood and belonging to a fallen, demonic world.

Twilight’s author, Stephenie Meyer uses her Mormon faith to infuse the series with themes of sexual abstinence, evil, and immortality.

“But there are some true stories in the Bible about people dying and then coming back to life again and we’re going to look at one now”.

Evidently, the point of the lesson is to emphasize the authority of the Bible. A fundamentalist adherence to the literal truth of scripture is a key element of Connect: “To understand that the Bible is God’s word: that it is historically reliable and still relevant today.”

The program emphasizes the literal truth of familiar Bible stories such as Adam and Eve, and Noah’s Ark. Connect refers to the story of Jesus turning water into wine as: “a true story…Jesus really did this; it wasn’t a magic trick.”

The authors apparently have no scruples with using violent and age inappropriate material to generate interest in the Bible.

Recent media reports have highlighted lessons threatening children they “will die” if they’re selfish, and asking them to roleplay the beheading in the David and Goliath story. Young children are denigrated as “sinners” deserving of punishment, and compared to dirty towels in need of cleansing.

The grisly material stands at odds with the protests of conservative religious groups about violent and pornographic material in video games and movies.

But the gravest concern is the contest for children’s souls – the explicit focus of the Youthworks Connect RI program.

Youthworks’ own website says that “the discipleship of children, youth and families is at the heart of everything we do.”

Making disciples “is why we exist”, they say.

Queensland RI policy prohibits proselytising, defined as “soliciting a student for a decision to change their religious affiliation”.

Windsor State School banned the Connect program for “soliciting children to develop a personal faith in God and Jesus and become a Christian or ‘Kingdom Kid’.”

The Connect program acknowledges that most students “are not yet Christians”, and piles on the entreaties to join the Christian faith, to become a Christian “Kingdom kid”, to “follow Jesus”, “be friends with Jesus”, and to have “faith in Jesus”. Children are even encouraged to tell their friends about “why they want them to know Jesus”.

“We are very aware statements made in the curriculum DO proselytise, but the Education Act is specific not to do this and to make sure we are only educating children about the Christian faith.”

Tellingly, Youthworks have obtained a legal opinion from Brisbane Barrister Stewart Webster, that the prohibition on proselytising applies only to attempting to change a person’s religious denomination.

Youthworks have forwarded the legal opinion to Education Minister Kate Jones, suggesting that they intend to enforce their perceived legal right to proselytise to non-Christian children.

While reviews into religious instruction continue, the respective State governments of Queensland and New South Wales must decide whether to allow the continued use of proselytising and age-inappropriate instruction material.

No action constitutes tacit approval for menacing youngsters with threats, belittling, damnation, and gruesome stories; and of transforming the classroom into a mission field for disciple making.

Vampires seeking to claim the souls of innocents is a ghastly, nightmarish thought: one that should frighten parents and children alike.