Freedom of Belief and Gay Marriage

This article is based on arguments presented in the Rationalist Society of Australia submission to the Australian Human Rights Commission Religious Freedom Roundtable.

We’ve no doubt the attendant will help us. Why wouldn’t they?

Similarly, if the shop doesn’t have a particular product we’re looking for, we might ask the assistant where we can get it.

Such attitudes reflect contemporary Australia, well-known as a relaxed, friendly and tolerant country.

We should not lose sight of community standards in considering changes to the law to accommodate same-sex marriage and freedom of belief. 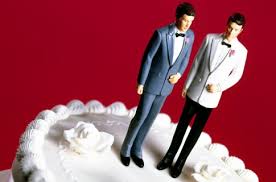 Not without reason, conservative Christian groups are worried about the effects of legalising same-sex marriage. In the US, an Oregon bakery was recently ordered to pay damages of $135k for refusing to serve a same-sex couple.

In Australia, none of the recently proposed same-sex marriage bills compel religious organisations to conduct wedding ceremonies. Where religious faith is inherent to an organisation, the State should not compel those organisations to act in a way that contradicts the fundamental requirements of their faith.

However, the same logic does not apply to service providers such as florists, caterers, cake makers and photographers. When these firms offer their services to the public, should they be bound by anti-discrimination laws? Can a law be devised to accommodate freedom of belief?

Here’s four ways freedom of belief for service providers can be reflected within a law on same-sex marriage.

1. No Allowance for Religious Conscience

The National Director of Australian Marriage Equality, Rodney Croome, argues discrimination based on religious beliefs could lead to other types of discrimination against divorcees or Muslims.

“I’m also concerned that this exemption is a narrow one that’s only focussed on same-sex couples and only allows discrimination against those couples, then that will clearly be motivated by prejudice and it will reinforce prejudice against same-sex relationships.”

But what if we can craft laws allowing the exercise of conscience without infringing the rights of same-sex couples?

2. Divide Marriage into Civil or Religious Unions Each Equal Under the Law

Australia’s Human rights Commissioner, Tim Wilson, argues for a balanced approach by dividing marriage law into civil or religious unions. This would allow service providers to offer their services as part of particular marriage traditions.

“The law would simply require that any wedding service provider announces up-front the marriage tradition or traditions for which they provide services.”

A service provider would choose to narrow the market to their selected religious tradition(s). It’s argued this option effectively allows the exercise of conscience without discriminating against LGBTI couples.

However, a “religious tradition” is too amorphous and arguable. A nominated tradition could be interpreted in any number of ways. Just look at the Catholic Church under Pope Francis compared to Pope Benedict! Also, the service provider would have too much power to moralise over prospective marriages. For example, would discrimination be lawful if the clients were a pregnant couple, a divorcing couple, couples who’ve had abortions, or if one member is of another faith?

Perhaps, however, the answer dwells within Tim Wilson’s argument.

3. Service Providers Must Disclose and Refer

In Victoria and Tasmania, doctors can refuse services for abortion as long as they disclose it upfront, and refer the patient to someone who can help them. This effectively balances doctors’ potential conscientious objection and women’s right to legal health services.

Applying this logic to same-sex marriage, service providers could refuse services as long as they disclose their policy in advance, apply it consistently, and offer information about alternative service providers.

Just like when we’re in a shop and they don’t sell the product we want. If possible, the attendant helpfully refers us on.

Notwithstanding the antics of Kentucky county clerk Kim Davis, if the government legalises same-sex marriage, government employees must uphold it. Providing a glaring example of the different divisions within “religious traditions,” the “conscience” of Kim Davis recoils at gay unions despite herself divorcing three times, committing adultery, and conceiving children out of wedlock.

When taxpayer dollars are involved, there should be no argument: any group in receipt of government funding must be required to abide by the law and not discriminate against same-sex couples.

Most Australians don’t even want to discuss the religious or political views of their fellow citizens, never mind limit them. To most of us, it’s self-evident that our own beliefs, no matter how sincerely or zealously held, don’t provide us with any a priori right to discriminate against the beliefs of others. Common sense, really. While the freedom to hold beliefs may be unlimited, the freedom to act upon those beliefs is necessarily limited by generally accepted community standards. In Australia, those standards include non-discrimination.

There’s also no reason why a religious belief should take priority over a non-religious one. Indeed, the United Nations Declaration of Human Rights (UNDHR), Article 18, General Comment 22, states:

“Article 18 protects theistic, non-theistic and atheistic beliefs, as well as the right not to profess any religion or belief. The terms ‘belief’ and ‘religion’ are to be broadly construed.”

How would we react if the service station attendant bluntly refused to provide directions to the country church, citing his religious beliefs?

Most of us would think it bad manners to say the least, and thankfully, unrepresentative of what usually happens in Australia.

Article 18 of The International Covenant on Civil and Political Rights (ICCPR) states “Everyone shall have the right to freedom of thought, conscience and religion.” It’s not just about protecting religious belief, but all types of beliefs.

The freedom to exercise one’s beliefs should be considered in the same-sex marriage debate, but within limits. Although option 3, “Disclose and Refer,” reflects a deference to faith-based beliefs that marriage equality exponents may feel uncomfortable with, it’s a compromise which might expedite same-sex marriage law.

But first, there’s a crucial question which remains unanswered: by what justification do we routinely grant religious beliefs special privileges over non-religious beliefs? To this question, there is no good answer.

Tim Wilson will be hosting the Religious Freedom Roundtable in November 2015 in which these issues will be considered.