Bigotry is bad business, so why not let the consumer decide?

Take a drive along any arterial road in Australia and you’re likely to pass dwellings dedicated to various deities with its congregants practising their brand of faith free of external interference. Apart from the exclusive varieties, most churches are open to anyone seeking respite from secular life. But as much as most churches are welcoming, they are free to exclude anyone who disrespects church ethos. Just as I can ask an unruly guest to leave my home, so too can a church official determine who leaves God’s home.

Unlike the government school at which I now teach, faith-based schools are free to refuse gay teachers, reserve the right to teach anti-evolutionary Biblical theories in science classes, and enforce moral views that are offensive to the non-religious.

Although the law under Section 75(2) of the Equal Opportunity Act permits most religious practices out of respect for religious freedom, the free market is not as tolerant. This is because businesses enter the marketplace on a quid pro quo basis. In exchange for access to a massive market, a business agrees to trade with everybody regardless of race, colour, sexual orientation or religious belief. Religious privilege is traded for market privilege.

This does not mean businesses cannot impose certain conditions on trade. There are many cases where a customer request can be legitimately declined. Take a car manufacturer who offers a particular model only in blue, green, and white. If a customer asks for pink and the manufacturer says, “We don’t do pink”, the manufacturer cannot be accused of discrimination. Clearly, the standard model must be available to all, but the manufacturer is not expected to accede to all customized requests. Refusal can be justified on the grounds of cost, marketing or business objectives. 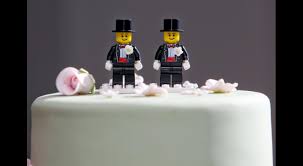 I see no ethical difference between this situation and the Christian baker in America who refused service to a gay couple. The controversy with this baker did not centre on his refusal to sell a wedding cake to the couple: to do so would be outright discrimination. The controversy revolved around the baker’s refusal to inscribe a personalized message that was inconsistent with the baker’s religious values. It may have been a bad business decision, but there is no law against running a business badly.

Within the Australian legal context, refusal to supply a wedding cake to a same sex couple would be a clear breach of the Sex Discrimination Act, which, since the 2013 amendments, makes it unlawful to refuse to supply persons because of their sexuality. There should, however, be space for, say, a socially progressive non-religious feminist baker to decline a request for an inscription on a wedding cake that reads, ‘A wife will serve and obey her husband’. If the non-religious baker can say ‘no’ to such a request on personal moral grounds, then a religious baker should be equally free to say ‘no’ to a groom-and-groom wedding cake.

There is nothing special about religion. As Article 18 of the United Nations Declaration of Human Rights stipulates, religious freedom applies to all beliefs, including atheistic and non-religious ones. So why make special legal arrangements for religion in the market place, as the Ruddock Inquiry panel was set up to consider? If we go down the path where proprietors of religious conviction are legally compelled to accede to a request that contradicts their moral beliefs, then the same demand must extend to all proprietors. The Christian baker would be legally compelled to inscribe an ISIS slogan on a wedding cake and the Jewish tailor would be coerced into fashioning a swastika-studded wedding tuxedo.

Assigning a government panel the task of determining which words and phrases are permissible or impermissible on merchandise is to threaten the very thing the Ruddock Inquiry was to set up to do: protect freedom of beliefs.

There is enough protection in Section 18C of the Racial Discrimination Act to ensure that offensive, humiliating or intimidating words based on race, colour, or national or ethnic origin, are contained. In a pluralistic liberal democracy such as ours, all businesses ought to be free to reject a customized request, but they do so at the risk of social backlash and financial calamity.

This article was first published in the Australian Rationalist, issue 110, September 2018.