A new poll by market research firm Ipsos has found that only 19.5 per cent of Australians are in favour of religious organizations having tax free status. The study asked if ‘churches and other basic religious organisations should continue to have tax-exempt status to advance religion?’ The answer was overwhelmingly in the negative.

Dr Meredith Doig, president of the Rationalist Society of Australia, says the study reveals that Australians are sceptical of the claims of religion – and even more sceptical about churches’ financial activities. “In this day and age, it’s just ridiculous to give tax exemptions for advancing religion – which means, after all, advancing belief in the supernatural,” she says.

“We don’t argue with giving tax exemptions to religious organisations that run schools or hospitals or welfare agencies. I think most would agree this work can be of genuine public benefit.

“But organisations like St Vinnies and the Salvos can get charitable status and tax exemptions under other heads of charity. It’s the ones that claim ‘advancing religion’ as their sole purpose that we’re concerned about. Why should the public support closed religious orders that just pray, for goodness sake, or the Australian Christian Lobby that is blatantly a political lobbyist – just because they can claim they are advancing religion?”

The Ipsos study found that 64 per cent of respondents rejected religions’ tax exempt status, while 16.5 per cent were undecided (responded ‘maybe’). People in rural areas were more strongly against the tax exemption. In rural Tasmania every respondent answered in the negative.

Income levels were also a factor. People who earned below $25,000 were more strongly against religions’ tax exempt status, as were unskilled labourers.

“These results confirm that Australians are seeing through the farce of giving tax exemptions for advancing religion, particularly people in regional Australia,” says Doig. “Advancing religion means advancing belief in the supernatural, and country people have had more than enough evidence that this just doesn’t work!

“We call upon the Government to review the Charities Act, with a view to introducing a public benefit test for any organisation that claims ‘advancing religion’ as its charity status.”

This Ipsos poll was conducted on Friday 8 April 2016. The number of respondents was 1,052. The sample was stratified to match Australian demographics.

Currently, churches and other basic religious organisations are entitled to tax-exempt status because “advancing religion” is presumed to be of public benefit.

Basic religious organisations do things like: teaching the practice of meditation, spreading the teachings of Islam, providing instruction on the Jewish religion, operating a church, synagogue, mosque or temple, providing religious education such as Sunday school programs.

Advancing religion means promoting “a belief in a supernatural being, thing or principle and acceptance of canons of conduct which give effect to that belief.”

Given the explanations above: 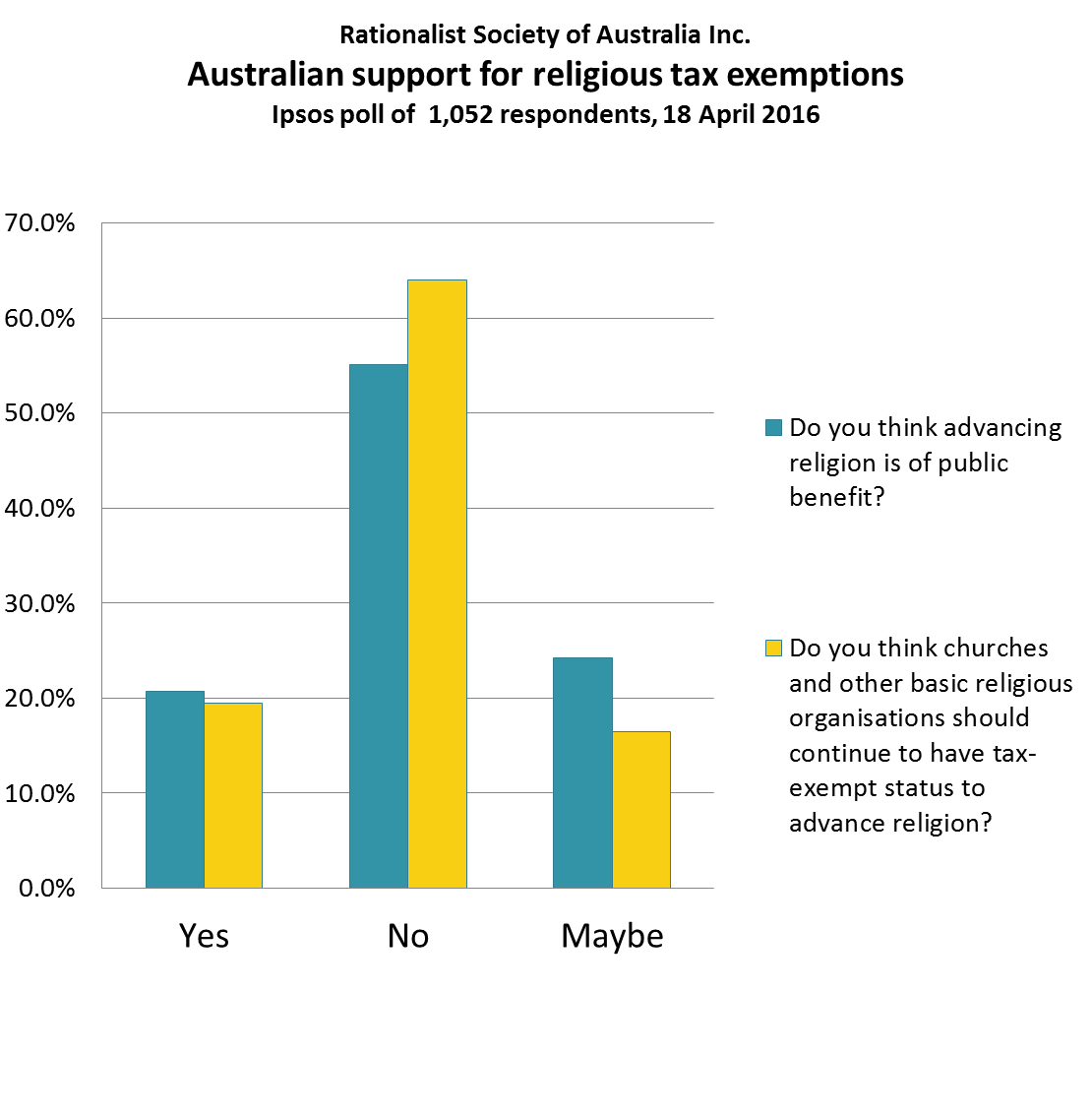