Anglican and Catholic bishops seem to be going out of their way to alienate their constituencies, including in respect of voluntary assisted dying and marriage equality law reform. As a result, the writing on the wall is writ large for the continued decline of religion in Australia. 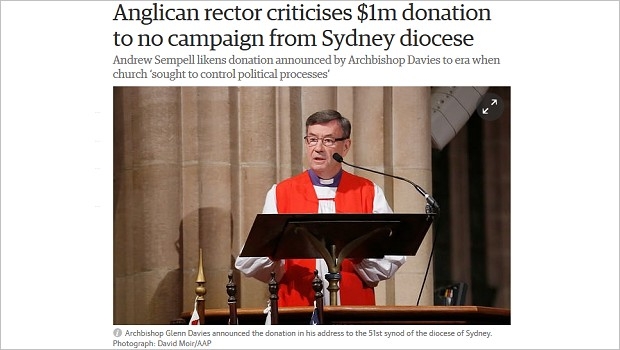 The Guardian reports a fracas within the Anglican church over a $1m political expenditure.
Many Australian clerics are trying their hardest to foil Parliamentary attempts to drag Australia into the 21st century on social policy. They seem to care little for the ongoing demise of their own constituencies.

Religion declining since the 1960s

Religious affiliation in Australia has been declining consistently since the 1960s, consecutive Australian Bureau of Statistics (ABS) census figures show (Figure 1). At the 2016 census, somewhat more than half (60%) of all Australians claimed a religion. More Australians than ever before identified as ‘no religion’ — for the first time ever a larger group than any single religious denomination.

Not only has religious affiliation been dropping, but the nature of the affiliation is weak (Figure 2). Amongst the two largest religious denominations, a quarter of Catholics (26%) and nearly half of Anglicans (47%) are Notionals: that is, they identify with the denomination but neverattend religious services. More than half of Catholics (52%), and four in ten Anglicans (41%), attend religious services only occasionally (Occasionals: several times a year or less often).

Just 22% of Catholics and a mere 12% of Anglicans demonstrate commitment to their denomination through dedicated service attendance (Regular = monthly or more often, and Devout = weekly or more often).

The picture is particularly grim for the Anglican church, dominant in Australia from Federation until the 1960s. With both a deeply impoverished affiliation rate in 2016 (13.3%), and just 12% of the flock dedicated to service attendance, a miniscule 1.6% of Australians are committed Anglicans.

The picture is only slightly better for the Catholic church. With 22.6% affiliation in 2016, and 22% of those committed to service attendance, it’s a slightly larger but still damningly small 5.0% of Australians who are committed Catholics. Further, the Catholic church’s affiliation may be significantly lower at the next (2021) census, as Australians vent their dismay and disgust at how badly it’s handled the scourge of child sexual abuse that’s occurred under its ‘pastoral umbrella.’

Across all religious denominations, just 16% of Australians are committed to their denomination — Regular or Devout religious service attenders — while 30.1% Reject religion altogether.

And yet those at the head of their ships of faith still demand that we listen to and comply with their moral dictates, assuming that they have an automatic right to steer our morality in their own chosen direction. If they think they’re ‘leading,’ most Australians aren’t following.

The indications are that they’re going the way of Kodak, now a small, wan shadow of its former dominant self. If the Anglican and Catholic churches were companies with voting shareholders (or even not-for-profits with voting members), the Boards and executives (archbishops and bishops) would have been, for overseeing such profound and continuing erosion of their brand franchises, replaced long ago.

Entrenched rather than learning

You’d think all this would be a warning message to archbishops and bishops to seek to understand their flocks and build bridges for mutual understanding and engagement; to demonstrate a bit of flexibility in recognising alternative and equally respectable moral codes that were not established in ancient and very different times. But no.

The fact is that to rebuild their franchises, the churches need to reach out to their Occasionals and to their Notionals — those who identify with the denomination but rarely if ever attend services. But the bishops have been pleasing only (some of) their Regulars and Devouts. It’s a classic and literal case of “preaching to the converted.”

In the matter of voluntary assisted dying (VAD) law reform, there are presently VAD Bills before both the NSW and Victorian parliaments. Figure 3 shows Australian attitudes toward VAD by religious affiliation.

Opposition to VAD amongst most denominations is very small, and really only makes an appearance amongst minor Christian and non-Christian denominations. Just 10% of Catholics and 7% of Anglicans oppose VAD, 5% and 3% of them strongly.

Only amongst Regulars and Devouts does opposition to VAD make a real appearance. Yet even amongst Devouts, with the strongest opposition, it’s in the minority (47%).

And what have the bishops been doing? They’ve campaigned strongly against VAD, spreading misinformation. Take for example the Catholic Church’s latest version of its anti-euthanasia polemic ‘brochure’ (Figure 5).

This amateur production reveals a superficial understanding of the issues and a penchant for hyperbole. Worse, it employs significant misinformation in order to create FUD (fear, uncertainty and doubt), as does an advertisement taken out by a number of bishops from various denominations, in Melbourne’s major daily newspaper (Figure 6). 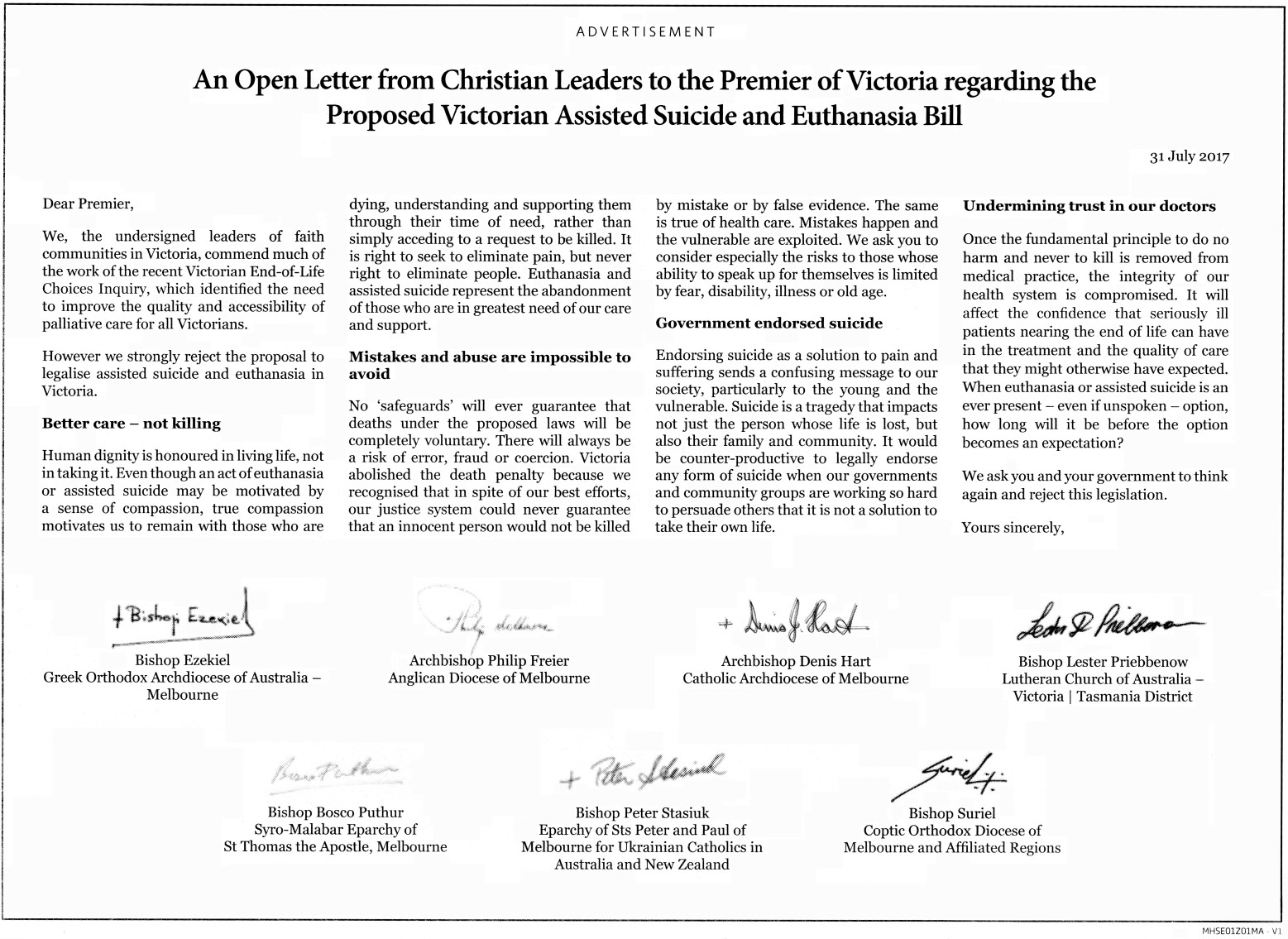 The bishops’ manoeuvres will only alienate their congregation’s least committed members, the Notionals and Occasionals — the very people they should be wooing back to the pews, and who are strongly supportive of VAD as a valid and respectable response to intolerable and unrelievable suffering at end of life.

Perhaps the bishops would find this suggestion unpalatable, too much like a sales pitch. If that’s the case, one can only point out that selling the claim of saving of souls is the very task of evangelism. One could ask, “is your God likely to approve heartily of the continued withering of Australian faith?”

The second contemporary example is marriage equality (ME). Figure 7 shows Australian attitudes to ME by religious denomination.

A clear majority of Australians in all groups except minor Christian denominations support marriage equality. That includes 74% of Catholics, 63% of Anglicans and 60% of Uniting Church members.

Support of marriage equality is in a clear majority amongst Rejecters (88%), Socialisers (82%), Notionals (73%) and Occasionals (71%). Around half (49%) of Regulars also support marriage equality.

Only amongst Devouts is support for marriage equality in the minority, with a quarter (25%) supporting and three quarters (75%) opposing it.

And what have the bishops been doing? They’ve run a massive campaign against marriage equality law reform. Indeed, the Anglican Archbishop of Sydney, Glenn Davies, announced that the diocese had donated, from precious church funds, $1 million to the ‘No’ campaign.

The public was even more dismayed to discover the diocese had granted just $5,000 to dealing with entrenched domestic violence in its ranks, at the same time as allocating the $1 million to preventing the equal expression of love.1

Given that marriage equality is almost certain to be legalised in Australia either directly after this voter ‘poll’ or in the term of the next Parliament, that’s an extraordinary squandering of a vast charitable sum for no net result. Calls have been made for the diocese’s tax-exempt status to be reviewed.

In fact, so refractory has been the stance of many bishops, that Australians of faith have resorted to establishing their own networks outside the churches, for example

Bishops’ conduct in relation to these reforms, which most Australians want, have been unhelpful by resisting Australia’s move into the 21st century — on the basis of ancient interpretations of scripture to which only a small minority of Australians subscribe.

The bishops’ conduct has run strongly counter to the compassion and understanding they could have shown in order to engage the Notionals and Occasionals amongst their flocks; to halt the erosion of their religious capital, and to rebuild it.

These bishops most certainly don’t represent the general views and beliefs of most Australians on VAD or ME. Rather, they give the appearance of administrators who are determined to preside over smaller and smaller congregations: a kind of “slow euthanasia.”